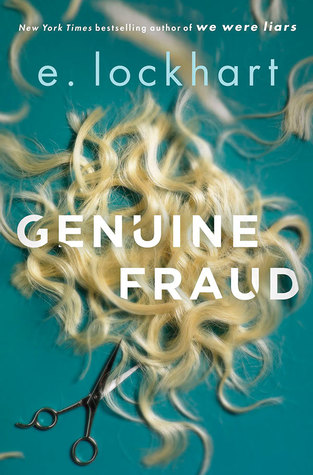 The story of a young woman whose diabolical smarts are her ticket into a charmed life. But how many times can someone reinvent themselves? You be the judge.

Imogen is a runaway heiress, an orphan, a cook, and a cheat.
Jule is a fighter, a social chameleon, and an athlete.
An intense friendship. A disappearance. A murder, or maybe two.
A bad romance, or maybe three.
Blunt objects, disguises, blood, and chocolate. The American dream, superheroes, spies, and villains.
A girl who refuses to give people what they want from her.
A girl who refuses to be the person she once was

It seems to me that E. Lockhart endeavoured to write a novel completely different from her highly successful and critically acclaimed We Were Liars, which I read earlier this year and fell in love with. I thought that We Were Liars conveyed an atmosphere similar to the one I had experienced while reading On the Jellicoe Road and therefore it was easy for me to get absorbed in the purple prose, the enchanting setting, the mystery, the Sinclair family drama…

Genuine Fraud was nothing like We Were Liars, except maybe the cryptic blurb and title and the beautifully designed cover. In terms of the literary genres approached in this book, it is worthwhile to mention YA, psychological thriller, mystery and suspense, although it was not at all difficult to put almost the entire puzzle together. This novel was written employing the reverse chronology technique, which Megan Miranda utilized cleverly in All the Missing Girls. I presume that E. Lockhart opted for this story-telling method in order to gradually reveal the motivations behind the actions of one of the two protagonists  and the chain of events in which she has been involved and resulted in her being under surveillance. To be honest, in the case of Genuine Fraud, the story told backwards didn’t necessarily work for me.

I had been eagerly awaiting the release of Genuine Fraud but, unfortunately, it proved an underwhelming and unsatisfactory read, far away from the greatness and exquisite execution We Were Liars has been known for. Halfway through the story, my interest already decreased and it was certainly not a positive and encouraging sign, considering that a novel of psychological suspense, as Genuine Fraud is being promoted, is supposed to keep you on the edge of your seat from the first page to the last, in my opinion. While I will definitely read the next book E. Lockhart is going to write, Genuine Fraud remains a fast-paced and relatively short novel with a mediocre plot, underdeveloped characters and no surprising twists and turns

Review made by Daniel Balici.